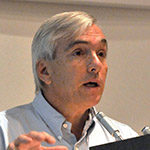 Dr. Ruben G. Echeverría, a citizen from Uruguay, has worked on agricultural and rural development issues for 30 years. He holds a B.Sc. degree in Agriculture from the University of Uruguay and a M.Sc. and a Ph.D. in Agriculture and Applied Economics from the University of Minnesota, USA. From 2000 to 2004, he was Director of agriculture and rural development at the Inter-American Development Bank (IDB) from where he promoted the development of a regional rural development strategy for LAC; the creation of the Regional Fund for Agricultural Technology [(Fontagro), an endowment that funds competitively regional research programs]; and the creation of the Inter-Agency Group for Rural Development in LAC. From 2004 to early 2009, he was the Executive Director of the Science Council of the Consultative Group on International Agricultural Research (CGIAR), based at FAO in Rome. Since 2007 he is the President of the International Board of the Center for Rural Development in Latin America (RIMISP). Since April 2009 Dr. Echeverría is the Director General of CIAT in Colombia.