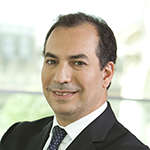 After completing his secondary education in Morocco and graduating from the Ecole Polytechnique and Ecole Nationale des Ponts et Chaussees in France, Amine joined BNP Paribas in 1987. Having started his career as a trader in Paris and New York, Amine subsequently moved on to several Management roles within Equities and Commodity Derivatives in Tokyo, London, Paris and New York.  These included Deputy Global Head of Equity Derivatives, and Head of Equity Derivatives for the Americas. In 2005 Amine was named by Financial News among the 20 most influential Europeans in America. Amine has been based in London since 2006, when he was appointed Global Head of Commodity Derivatives, managing teams in London, New York, and Singapore. In August 2016, Amine took on a new role in the field of  Sustainable Investments and Research, and currently works for BNP Paribas.