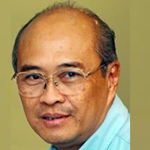 Dr. Kuntoro Mangkusubroto chairs the Steering Committee of the Tropical Landscapes Finance Facility TLFF), a US$ 1 Billion investment platform that leverages ‘private finance for public good’ and works to empower smallholders and marginal communities by enhancing the ‘GDP of the Poor’ through improved agricultural productivity and energy access in Indoensia. As the Head of President’s Delivery Unit for Development Monitoring and Oversight (UKP4) in Indonesia from 2009-2014, Dr. Mangkusubroto was responsible for overseeing the progress of the Indonesia’s national development priorities as implemented by line ministries and other government agencies, resolving bottlenecks in implementation. From 2010-2013, he was also assigned by the President of Indonesia to chair the National Taskforce for Reduction of Emissions from Deforestation and Forest Degradation (REDD+). As Head of the National REDD+ Task Force, Dr. Mangkusubroto led the USD 1 billion Indonesian-Norwegian Climate and Forest Partnership to help catalyze a transition to climate friendly sustainable management of forest resources and green economic development in Indonesia. As Head of the Indonesia National Committee on the post-2015 Development Agenda, Dr. Mangkusubroto led and coordinated the national consultations on Indonesia’s input to the HLPEP on a post-2015 Development Agenda and he was also the Sherpa to President Yudhoyono in his role as the Co-Chair of the UN SG’s HLPEP on a post-2015 Development Agenda. Dr. Mangkusubroto was the Ministerial Head of the national Post-Tsunami Rehabilitation and Reconstruction Agency (BRR) for Aceh-Nias from 2005-2009. As the Head of BRR, he led the reconstruction effort with funds amounting to USD 7.2 billion, 70% of which came from foreign assistance. The outcome of the reconstruction has since become an international role model for post-disaster reconstruction and recovery. Dr. Magkusubroto also played a significant role in the Indonesian energy and natural resources sector, where he was the Minister for Mining and Energy (1998-1999) and CEO of PLN (state electricity company, 2000-2001), PTBA (state coal mining company, 1988-1989), and Timah (state tin mining company, 1989-1993). His restructuring effort at Timah managed to turn around the ailing company to a point where it became the benchmark for excellence in tin mining globally. Dr. Mangkusubroto gained his doctorate in Decision Science from ITB, where he also earned his first engineering degree. Prior to his doctorate, he earned two master’s degrees – M.Sc. in Industrial Engineering and M.Sc. in Civil Engineering – both from Stanford University. He is also the Chairman of Governing Council, School of Business and Management – Institut Teknologi Bandung (SBM-ITB), a business school he co-founded in 2003 and has since become its member of Decision Making and Strategic Negotiation expertise group. He has given public lectures in various universities worldwide such as National University of Singapore, Nanyang Technological University, NYU, Stanford University, Columbia University, Yale University, Princeton University, Harvard University, North-eastern University and numerous other institutions and think-tanks. His outstanding achievements have earned him several recognitions such as the Association of South East Asian Nations (ASEAN) Engineering Excellence Award in 1996 and Honorary Lee Kuan Yew Exchange Fellow from the government of Singapore in 2006. He also sits on various advisory boards, among others, the Board of Governors of the North-eastern University, at the Center for Strategic Leadership, WANADRI and National Research Council (DRN) as well as chairs the Global Rescue Network.