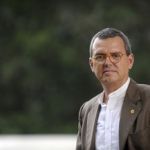 Edgar Gutierrez Espeleta is the Minister of Environment and Energy of Costa Rica, and the President of the United Nations Environmental Assembly. He has been a professor at the University of Costa Rica, co-founder of the project “State of the Nation” of the National Rectors Council of Costa Rica and founder of the Observatory for Development at the University of Costa Rica. Previous positions include Director of the School of Statistics of this university and Director of the Graduate Program in Statistics. He was also coordinator of the project “Atlas de Desarrollo Humano Cantonal”, ("Atlas of Cantonal Human Development"), a joint initiative with UNDP. He has over 30 publications in national and international journals and a book about statistical methods. Minister Espeleta lead the first two reports of the United Nations Environment Programme about the status of the environment in Latin America and the Caribbean, the first environmental report in Central America, and the deck of environmental data for Latin America and the Caribbean, among others. He also directed the National Environmental Strategy of Costa Rica in 2005. His research areas include sustainable development, development of indicators, human security, environmental change and public higher education.