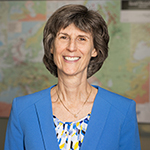 Laura Tuck assumed the position of World Bank’s Vice President for Sustainable Development on July 1, 2015. In this role, she oversees the work of the Global Practices and Cross-Cutting Solutions Areas (CCSAs) that bring together the best expertise from across the World Bank Group, and from partners, to help countries tackle their most complex challenges in the area of sustainable development.  The practices and CCSAs under her responsibility include Agriculture; Climate Change; Energy and Extractives; Environment and Natural Resources; Public-Private Partnerships; Social, Urban, Rural and Resilience; Transport and ICT; and Water. Before taking this position, Ms. Tuck served for close to two years as Vice President for the Europe and Central Asia (ECA) region.   During this period, ECA’s lending and advisory services increased substantially, stepping up support for programs and projects aligned with the goals of reducing poverty and increasing shared prosperity. Her extensive experience in sustainable development includes a decade leading the Bank’s work in this area in two regions. Between 2002 and 2006 she was the Director for Sustainable Development in ECA and, from 2006 to 2011, she held the same position in the Latin America and the Caribbean Region.   She then became Director of Strategy and Operations supporting the Regional Vice President in the MNA region, followed by a stint in the same position in ECA. Ms. Tuck joined the World Bank in 1987 as a Young Professional, and worked initially as an Economist in the Middle East and North Africa Region (MNA) and, later, in the ECA Region, as a Lead Economist in the Chief Economist’s Office and then as Sector Manager for Agriculture and Rural Development. Before joining the World Bank, Ms. Tuck worked for several consulting firms in the area of agricultural policy, food policy, and food needs assessments.  She also served on the faculty of Princeton University as part of a university research project, and worked and lived in Africa between 1980 and 1987. Ms. Tuck has an MPA from Princeton University in Economics and Public Policy and a BA from the University of California at Davis in Economics.  She is married and has two grown children.