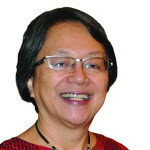 UN Special Rapporteur on the rights of indigenous peoples