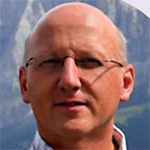 Dr. Simon Heck joined CIP in 2012 as Deputy Program Manager for Sweetpotato in Africa. He took on leadership of the regional Scaling-Up Sweetpotato through Agriculture and Nutrition (SUSTAIN) project in 2013 and of the sweetpotato program in 2014. An anthropologist by training, Simon previously worked with the CGIAR’s WorldFish Center, IUCN, and DFID. Simon has extensive experience of leading research and development projects in agriculture, aquatic resources, and environmental management. He has been chair of the Agro-enterprise Learning Alliance for Eastern and Southern Africa and has contributed to policy and strategy development in several regional and national institutions in Africa. His disciplinary expertise is in social science and he has contributed to CGIAR research on resilience of social and ecological systems, food security, social development indicators, land tenure, and innovation systems. He has a PhD in Social Anthropology from Boston University, USA.