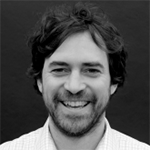 Niki has been actively involved with environmental issues since 1996. Initially as a volunteer for H.A.H. Ecumenical Patriarch Bartholomew’s acclaimed initiative to bring together religious leaders across faiths with scientists across disciplines to more effectively tackle the world’s growing water security challenges. In 2006, he took on a full-time role as joint Coordinator for the Patriarch’s Amazon Symposium, that carried 200 faith-leaders, scientists, politicians and journalists on 11 boats through the world’s greatest forest. Niki joined the Global Canopy Programme in 2007 to establish its new forests and climate change programme. As the organisation has rapidly grown, he has served as Head of Strategy and Communications, Director of Global Programmes, and Deputy Director before taking on the role of Executive Director at the start of 2016. Niki has led on strategy for GCP for the last years, and helped to establish many of the organisation’s key initiatives, including The Forests Now Declaration, the Little Book Series, the Forest Footprint Disclosure Project, the Natural Capital Declaration and Roadmap for the financial sector, and most recently the Forest 500, the world’s first ratings agency for rainforests. Niki has written and spoken extensively on tropical forests and other issues. He holds a first class degree from the University of Cambridge, and an MSc from the London School of Economics.