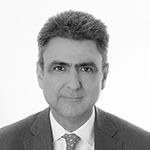 Michael Wilkins is a Managing Director at S&P Global Ratings based in London where he has global responsibility for the firm’s infrastructure, environmental and climate risk research. Michael experience at S&P Global Ratings includes seven years as Head of Infrastructure Finance Ratings, the analytical group within S&P Global Ratings which covers utilities, project finance, PPPs and transportation in Europe, the Middle East and Africa. Michael was also co-head of the Corporate Securitisation group. He joined S&P Global Ratings in London in January 1994 and has also worked in the Melbourne and Hong Kong offices. Michael’s expertise encompasses the European power, water, environmental, transportation and social infrastructure sectors. Previously, Michael worked for Water UK, the trade body representing the UK water industry. He also worked for four years as a journalist on various UK daily regional newspapers and global business publications. Michael is a frequent guest lecturer at the London Business School MBA programme, Judge Business School, Cambridge University, MFin programme and Oxford University’s Smith School of Enterprise & the Environment as well as at UCL and King’s College, London. He is a non-executive director on the board of the International Project Finance Association (IPFA). He is also a member of the FSB Taskforce on Climate Related Financial Disclosures (TCFD), the G20 Green Finance Study Group (GFSG), the advisory council of the Smith School Sustainable Finance Programme and the Climate Bonds Initiative. Michael has a Bachelor of Arts degree within Modern Languages at Bristol University. He also holds an MBA in Finance from the Cass Business School and additionally has a Certificate of Carbon Finance & Analytics from the London Business School.