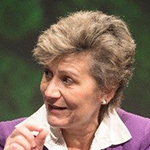 Magda Lovei has been working at the World Bank since 1993. Early in her career in the Bank, she worked in investment projects, policy-based lending operations, studies, and technical assistance programs in several countries from Africa to Eastern Europe, East and Central Asia, and Latin America. During the 1980s, she led the Bank’s successful global initiative aimed at phasing out leaded gasoline world-wide. As Lead Environmental Economist at the Environment Department of the World Bank, she was in charge of the preparation and implementation oversight of the World Bank’s first corporate Environment Strategy, approved by the Bank’s Board of Directors in 2001. Since 2003, Ms. Lovei has held various management positions including Sector Manager for Environment, in the East Asia and the Pacific Region (EAP); Manager of Policy and Operations, Sustainable Development Department (EAP); Sector Manager for Social Development, Environment, and Rural Development (EAP); and since July 2012, Sector Manager for Environment, Natural Resources, Water, and Disaster risk Management in the Africa Region.