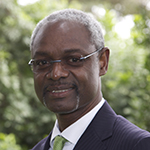 Mr. Ibrahim Thiaw is the Deputy Executive Director for the United Nations Environment Programme (UNEP) and Assistant Secretary-General of the United Nations. He has served in this position since his appointment by United Nations Secretary-General Ban Ki-moon in August 2013. Mr. Thiaw plays a critical role in providing leadership and shaping the strategic vision and direction of the organization.  He provides direct oversight to the development of the programme of work and plays a critical role in the implementation of UNEP’s mandate and management of the organization, as well as advancing the on-going internal performance and reform agenda. Mr. Thiaw also contributes in catalyzing UNEP’s political engagement with governments and the relationship with UNEP's Governing Bodies, including the United Nations Environmental Assembly. Prior to his appointment as Deputy Executive Director, Mr. Thiaw served as the Director of UNEP’s Division of Environmental Policy Implementation (DEPI). As Director for DEPI, Mr. Thiaw was responsible for conceptualizing and managing UNEP's activities in two of its core thematic areas of focus - ecosystem management; and conflicts and disasters. He also managed the adaptation component of UNEP's climate change sub-theme. Before joining UNEP in 2007, Mr. Thiaw worked as the IUCN Regional Director for West Africa and later as the Acting Director-General of IUCN. With 33 years of substantive experience in the fields of sustainable development, environmental governance and natural resource management at the national, regional and international levels, Mr. Thiaw has been successful in the development and implementation of large scale, global environmental programmes and projects and in addressing complex management and organisational challenges. Mr. Thiaw holds an advanced degree in Forestry and Forest product techniques.