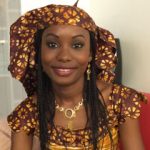 22Hindou Oumarou Ibrahim is an indigenous woman from Mbororo pastoralist community of Chad, She is a Coordinator of the Indigenous Women and Peoples Association of Chad (AFPAT “Association des Femmes Peules Autochtones du Tchad”) a community based organization. Hindou is a member of the Executive committee of the Indigenous Peoples of Africa Coordinating Committee (IPACC), in which she is a representative of the Congo Basin Region, with a background in indigenous peoples' rights and environment protection with the three Rio Conventions (Biodiversity, Climate Change and Desertification) with multiple responsibilities. She represented SCO at the Paris agreement signature in New York at the UNGA. Many publications, consultation, articles and documents write in these areas. Hindou is Expert in adaptation and mitigation of Indigenous Peoples on Climate Change, traditional knowledge on the adaptation of pastoralists inAfrica, expert on women and climate change in Africa. Also she is Co-Chair of International Indigenous Peoples Forum on Climate Change, representing CSO at the UNCCD and she is Policy board Member of the United Nations- Indigenous Peoples Partnership (UNIPP). She is member of Reseau Climat & Développment and RPP Chad National committee. She is the chair of recruitment and Co-Chair of the Pan-African Alliance Climate Justice (PACJA). She organizes 4 International workshops the 3 pass years on Sciences knowledge and traditional knowledge, she conducted a 3D participatory mapping project with UNESCO, IPACC, CTA, CI and Chad government. And this year she coordinated the COP21 climate change preparation and negotiation and the indigenous peoples pavilion for all the Indigenous Peoples around the word. She works on the 3 UN languages, French, English and Arabic.