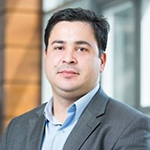 Fernando Sampaio graduated in Agronomic Engineering from the Escola Superior de Agricultura "Luiz de Queiroz" (USP / ESALQ). From 2009 to 2010 he was coordinator of sustainability of the Brazilian Association of Meat Exporting Industries (Abiec), responsible for dialoguing with civil society in discussion groups on sustainable livestock; and in 2011, he became Abiec’s CEO. In August this year, he was elected Executive Director of the PCI (Produce, Conserve and Include) Strategy State Committee, which was established by Governor Pedro Taques in March this year to monitor compliance with the targets presented in COP21. During the meeting, Mato Grosso pledged to reduce illegal deforestation to zero by the year 2020 and to take action to curb global warming. The purpose of the Committee is to establish a system of governance to plan the details and implementation of the goals of the PCI Strategy, which seeks to expand and increase the efficiency of agricultural and forestry production of Mato Grosso, together with the conservation of native vegetation and restoration of environmental liabilities, with the socio-economic inclusion of family farming and traditional populations.