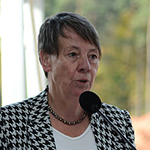 Barbara Anne Hendricks is a German politician and member of the SPD party. Since 17 December 2013 she has been Federal Minister for the Environment, Nature Conservation and Nuclear Safety. From 2007 to 2013, she was Federal Treasurer of the SPD, and from 1998 to 2007 she was Parliamentary Secretary of State at the Federal Ministry of Finance. Barbara Hendricks was born in Kleve. After obtaining her Abitur in 1970 at the Johanna Sebus Gymnasium in Kleve, Hendricks studied History and Social Sciences in Bonn, passing the Staatsexamen examination for high school teachers in 1976. She then worked for the Association for Student Affairs until 1978. After that, until 1981, she was a deputy press secretary at the press office of the Bundestag parliamentary party of the SPD. In 1980 she was awarded a doctorate based on a thesis entitled Die Entwicklung der Margarineindustrie am unteren Niederrhein [The development of the margarine industry on the lower Rhine]. She was then press secretary of the minister of finance of the state of North Rhine-Westfalia until 1990. In 1991 she was appointed Permanent Secretary at the Ministry of the Environment, Spatial Planning and Agriculture of the State of North Rhine-Westfalia.