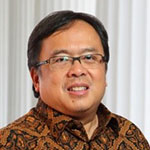 Bambang Permadi Soemantri Brodjonegoro is currently the Minister for National Development Planning (Bappenas), having been appointed to that role by President Joko Widodo on 27 July 2016. He was previously the Minister for Finance (from 27 October 2014 to 27 July 2016) in President Widodo’s Working Cabinet. Under President Susilo Bambang Yudhoyono’s administration, Bambang served as the Deputy Minister for Finance (from 3 October 2013 to 20 October 2014). Bambang is one of Indonesia’s leading economists, with a Bachelors Degree in Economic Development and Regional Economy from the University of Indonesia (1990), and a Masters Degree (1995) and PhD (1997) in Urban and Regional Planning from the University of Illinois, USA. His areas of expertise include regional economics, fiscal decentralisation, public finance, development economics, urban economics and transportation. Prior to his ministerial positions, Bambang’s career included Commisioner roles with PT Pertamina (a national Oil & Gas company); PT Aneka Tambang (a State-owned mining company); PT Adira Insurance; and PT PLN (the national electricity company). He is active on a number of international boards including the ASEAN Infrastructure Fund and the ASEAN+3 Finance and Central Bank Deputies Meeting. He is a committed and active academic, currently a Professor of Economics at the University of Indonesia. Prior experience has included positions as guest lecturer in the Department of Urban and Regional Planning with the University of Illinois; Director General of the Islamic Research and Training Institute at the Islamic Development Bank; and Dean of the Faculty of Economics with the University of Indonesia. He was born in Jakarta on 3 October 1966.