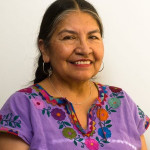 Tarcila Rivera Zea is the founder and President of the Centre for Indigenous Cultures of Peru and one of the most well known indigenous activists in Peru. Her achievements include the founding of the Continental Network of Indigenous Women of the Americas, and the International Forum of Indigenous Women, organizations that promote the leadership and political participation of millions of indigenous women throughout the world. Ms. Rivera was awarded a prize in 2013 by the Ladies’ Committee of the Congress of the Republic of Peru for her unrelenting efforts and vocation in the service of her community. In 2014, the Peruvian Ministry of Culture acknowledged her for her contribution to the defence of indigenous cultures. In the same year, she was also acknowledged by the Sacred Fire Foundation of the United States of America for her defence and promotion of the traditional knowledge of indigenous peoples.