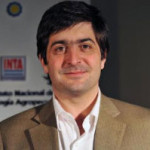 Roberto Delgado has held several posts at INTA, the National Agricultural Technology Institute, since 1998. He entered the INTA as an economist at the Agricultural Experimental Station Bordenave, and from 2003 to 2006 worked for agricultural finance Transfer and Extension (INTA Central). From 2006 to 2013 he served as national director of Information Systems Communications and Quality at INTA Central, and in 2013 he took over as director of INTEA (Technological Innovations Agricultural), in the support unit and link between INTA and actors in the agroindustrial chain. Gabriel Delgado obtained a degree in Agricultural Economy in France, a Master’s Degree in Finances at CEMA (Center for Macroeconomic Studies of Argentina), and in 2009 earned his first PhD in Finance.

Notice: Trying to get property 'post_id' of non-object in /home/landscapesvm/archive.globallandscapesforum.org/wp-content/themes/landscapes2014/sidebar-speakers.php on line 28