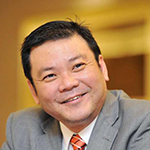 Nazir Foead was appointed by the President to lead Peatland Restoration Agency (BRG RI) in January 2016. He has to lead restoration actions of 2 million hectares of Indonesia’s peatland within five years. Prior to this, Nazir joined Climate and Land Use Alliance as the Indonesia Initiative Coordinator in February 2014, to direct grants and support for Indonesia’s CSOs. He was the Conservation Director of WWF Indonesia, managing over 300 staff in 26 conservation sites, from 2010 before joining the Alliance.