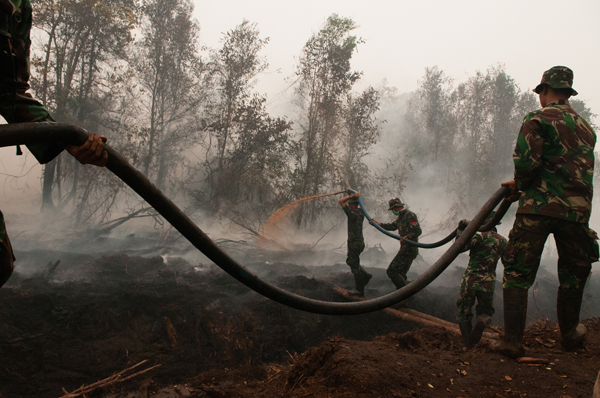 Peatlands are important carbon sinks and stocks, estimated to hold more than 600Gt of carbon. When drained, they are especially susceptible to fires. At the same time, millions of farmers derive their livelihoods from unsustainable agricultural practices on these lands. The fire and haze event in Indonesia in 2015, which produced 15% of the world’s carbon emissions that year over several weeks, caused billions of dollars in economic losses and created a public health crisis, bringing these conflicting issues to the forefront of global attention.

Over the past two years, Indonesia has prioritized the sustainable use of peatlands. In January 2016, President Joko Widodo established the Peatlands Restoration Agency (Badan Restorasi Gambut or BRG). And, UN Environment and partners launched the Global Peatlands Initiative at COP22 in Marrakesh in November 2016. These two bodies (respectively national and international) work at both the policy and field frontlines for the protection and sustainable use of peatlands. Indonesia’s Ministry of Forestry and Environment and Ministry of Agriculture also jointly contribute to these efforts.

Meanwhile, the corporate sector, which uses peatlands for palm oil production, has made commitments to restore millions of hectares of degraded peatlands in Indonesia and elsewhere (as the Republic of Congo, the Democratic Republic of Congo and the Peruvian Amazon also contain immense peat reserves). Even with these promising pledges and activities occurring across sectors, there is still much to learn about what that restoration entails and who will pay for it, as well as addressing complex governance challenges.