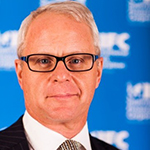 Ernest Bethe is the Principal Operations Officer for Indonesia at the International Finance Corporation (IFC). He has extensive experience in agribusiness development with expertise in business building and restructuring, and leadership in team formations and innovation. Mr. Bethe plays a leadership role in strategy development and execution for Manufacturing, Agribusiness and Services projects in Indonesia, Mongolia, and South Asia, including projects to develop supply chain finance for smallholders. An integral part of Mr. Bethe’s responsibilities is to manage engagements with key stakeholders, ensuring their focus on environmental and sustainability standards.

Prior to joining the IFC in December 2006, Mr. Bethe worked with U.S.-based Cargill and Land O’Lakes, and co-founded the food safety testing company, Enterprise Development. He has lived and worked in the U.S., Asia, Africa, and the former Soviet Union.

Mr. Bethe has a BBA in Finance and English & American Literature from Eastern Michigan University, and an MS in Corporate Science from Colorado State University.