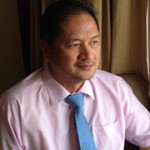 Dean of the Ateneo School of Government, Philippines

Tony La Viña is Dean of the Ateneo School of Government in the Philippines. He is a social entrepreneur and an environmental and human rights advocate who has been active in the climate change negotiations since the first session of Conference of the Parties of the United Nations Framework Convention on Climate Change in Berin, Germany. A lawyer by profession, he played leadership roles in Kyoto in 1997 as the chair of the land use change and forestry negotiations and in Copenhagen in 2009 where, he chaired the Reducing Emissions from Deforestation and Degradation (REDD+) negotiations. In the Durban Climate Change Conference in December 2011, he once again chaired the REDD+ negotiations. Mr. La Viña also worked for the World Resources Institute and as Undersecretary of the Department of Environment and Natural Resources in the Philippines. He is currently a member of the Board of Directors of several national and international organizations, such as the Manila Observatory, Center for International Forestry Research, Southeast Asia Regional Initiatives for Community Empowerment (SEARICE), and Center for International Environmental Law. He is the Co-Chair of the Partnership Council of Partnerships in the Environmental Management for the Seas of East Asia and the Board of Trustees of the Institute for Social Entrepreneurship in Asia (ISEA). He is also the Chairman of the Board and President of Ashoka: Innovators for the Public (Philippines) Inc.