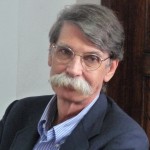 Philip M. Fearnside is a resesarcher in the Departement of Ecology of the Instituto Nacional de Investigaciones de la Amazonia (INPA) en Manaus, Brazil. Since 1992, his work has been focused on the goal of making the Ecosystem Services of the Amazonian rainforests into a foundation of sustainable development for the rural population of that region. In 2006, Thompson-ISI identified him as the second most cited researcher worldwide in topics related to global warming. Mr. Fearnside has a PhD in Ecology and Evolutionary Biology from the University of Michigan.