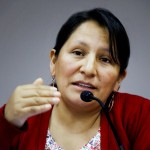 Luz Gladis Vila Pihue is President of the Founding Congress of the National Organization of Andean and Amazonian Indigenous Women of Peru (ONAMIAP). From a young age, she was involved in organizing her community, despite the tradition of male dominant participation in community assemblies. She promoted the creation of the Pampas Tayacaja Province’s Women Organization, which led her to represent her region at several national events. She is Quechua and has had an active participation in the adoption process of the United Nations Declaration on the Rights of Indigenous Peoples (2005 to 2007) and in the United Nations Permanent Forum on Indigenous Issues for several consecutive years.