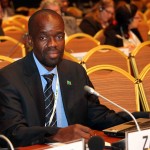 Director of Forestry, Government of Zambia

Ignatius Makumba is Director of Forestry in the Ministry of Lands, Natural Resources and Environmental Protection (MLNREP) of Zambia. He has served at various levels in government since 1991 working in the Forestry Department, at Zambia Forestry, as an Instructor, and in the Environment and Natural Resources Management Department in charge of policy formulation in environment and natural resources. He has also worked with various cooperating partners that include the UN System, the United States of America for International Development, the Government of Finland, the Royal Dutch Government and Denmark, in implementation of environment and natural resources projects. Mr. Makumba also was a member of the Convention on Biological Diversity Subsidiary Body on Scientific, Technical and Technological Advice (SBSTTA) from 2010 to 2012 representing the African Region, and Vice Chairperson of the Committee of the International Conference of the Great Lakes Region (Africa) on the fight against illegal exploitation of natural resources from 2009 to 2012. He holds a Master’s degree in forestry from the Copperbelt University in Zambia, forestry Diploma from Zambia’s Forestry College and a Technical Teacher’s Diploma.