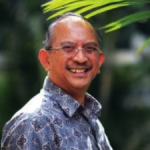 Heru Prasetyo is the Head of the National REDD+ Agency in Indonesia. His responsibilities included chairing the global REDD+ Partnership and developing the national framework on climate change mitigation in forestry, agricultural sectors and natural resources. Previously he served as Deputy of Planning and International Relations of the President’s Special Delivery Unit for Development Monitoring and Oversight, and Secretary of the National Committee of the Post-2015 Development Agenda. Mr. Prasetyo also held the position of Director for International Relations of the Executing Agency for Reconstruction and Rehabilitation Aceh-Nias. He has extensive private sector experience, having been a consultant for more than 15 years, and served as Country Managing Director for Indonesia at Accenture in 2002 (1974 – 2002). Mr. Prasetyo graduated from Industrial Engineering, Institut Teknologi Bandung in 1974 and received his Master of Business Management from Asian Institute of Management in 1978.