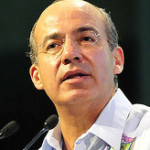 Chair of the Global Commission on the Economy and Climate

Felipe de Jesús Calderón Hinojosa is the Chair of the Global Commission on the Economy and Climate. Previously he served as President of Mexico from December 1, 2006 to November 30, 2012. He served as Head of the national development bank, Banobras, under his predecessor, Vicente Fox and was Energy Secretary from 2002 to 2004. Mr. Calderon is also a former president of the PAN, the party his father, Luis Calderon Vega, helped to create. He was President when Mexico hosted the UNFCCC COP-16 in Cancún 2010. He received a Bachelor’s degree in Law from the Escuela Libre de Derecho, a Master’s degree in Economics from the Instituto Tecnológico Autónomo de México (ITAM) and a Master of Public Administration in 2000 from the John F. Kennedy School of Government at Harvard University.