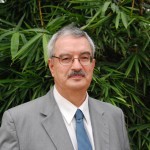 Braulio Ferreira de Souza Dias is Executive Secretary of the Convention on Biological Diversity (CBD). He has over three decades of experience in biodiversity science and policy and its implementation at national and international levels. Mr. Dias has occupied leading positions in the Brazilian Federal Government administration. Before joining the Secretariat, he was Secretary of Biodiversity and Forests at the Brazilian Ministry of the Environment, and before that Director for Biodiversity Conservation, overseeing national biodiversity and forest programs directly implemented by the Ministry of the Environment. He brings a unique combination of scientific training and extensive experience in negotiation. He served on the Brazilian Delegation for the United Nations Conference on Environment and Development in Rio de Janeiro in June 1992, as well as on the Intergovernmental Committee of the CBD in 1993 and 1994. He obtained a BSc in Biological Sciences from the University of Brasilia and went on to obtain his PhD in Zoology from the University of Edinburgh.