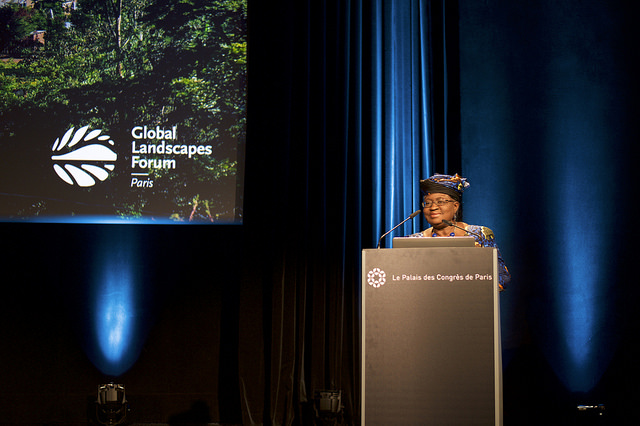 With land use and livelihoods receiving unprecedented attention at the UNFCCC COP21 in Paris, proponents of an integrated approach to managing land use might well be feeling endorsed.

But, as speakers at the 2015 Global Landscapes Forum in Paris warned today, achieving such sustainable land-use management will require massive amounts of investment.

And those amounts are not yet there, Ngozi Okonjo-Iweala, Nigerian economist and former Minister of Finance, pointed out in the opening session of the event.

The Forum, organized by CIFOR and a consortium of partners, brought together some 3000 people on its opening day to explore the role of land use in reaching climate and development goals. 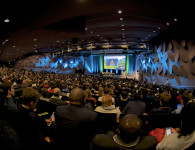 Okonjo-Iweala welcomed the fact that most African countries had included land-use interventions in their intended nationally determined contributions (INDCs) as part of ongoing climate negotiations, especially given FAO estimates that one-third of agricultural landscapes are degraded—mostly in developing countries.

She then went on to quote a new paper by the New Climate Economy Project showing that $250 billion is needed each year to fund landscape conservation and restoration, activities she described as “essential to achieving a vital triple win for development and climate: increasing rural productivity, resilience and mitigation simultaneously”.

And yet, the report said, current spending is only at $25 billion, of which 60% comes from domestic budgets.

The funding will come only as a combination of private investment and local community involvement, Okonjo-Iweala said.

“Should it come from rich donor countries? Yes. But will it? No,” she said.

“The good news is that there’s more than $100 trillion in private investment capital around, and interest rates are very low,” she added. “But the bad news is that landscape investments in developing countries are inherently risky.” 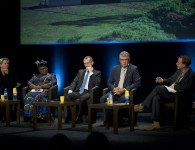 Several other speakers at the Global Landscapes Forum joined the renowned economist in calling for government and donor financing to focus on lowering risk and opening new areas of investment to bring the private sector on board.

One of them was Baroness Ariane de Rothschild, Chair of the Executive Committee of the French banking group Edmond de Rothschild.

“Dwindling government subsidies or philanthropy alone cannot fund the fight against deforestation that is so essential to curb climate change, of which it accounts for 20 percent,” she said.

“It must take the form of multiple projects that are sustainable because they are profitable.”

Another challenge she mentioned was the duration of investment needed—from 10 to 20 years.

She mentioned investment funds that her institution has been managing, such as the €300 million Gingko Advisor fund dedicated to the restoration of polluted soils in Europe or the developing €80 million Moringa fund focused on sustainable agroforestry.

Yet despite the potential evident in such cases, the investment is not yet at a scale to match the needs.

Speaking at the opening session of the Forum, CIFOR Director General Peter Holmgren added up the hundreds of billions of dollars flowing through the hands of those who inhabit and manage rural landscapes worldwide, from agriculture to remittances.

“The landscape economy is huge and investment in landscapes must be scaled up. Making those investments generate real returns will be crucial,” he said. 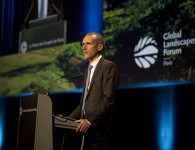 One way of looking at investment in landscape sustainability is for a company to scrutinize its own supply chain, as Emmanuel Faber, CEO of Danone, explained.

Faber said he had come to the realization that while the food industry had built complex value chains across the world, “we have all forgotten that foods start in soils. We have disconnected the food chain.”

Carbon, he added, was a revealing “measure of how desynchronized we are”.

Faber said that although Danone has broadly stabilized its greenhouse gas emissions in recent years, this was not enough and its target was now to peak and start cutting emissions within 10 years.

“We have decided to reframe our climate policy and make it match the 2°C scientific scenario,” he said, referring to the target given to negotiators at the COP21 talks.

Faber added that his company’s efforts would extend beyond its own operations—from farm to consumer.

“Instead of looking at the part of the cycle that we control, we are now going to be responsible for the carbon emissions, of the full cycle of our processes,” he said.

This will be a challenge, given that the agriculture sector—which supplies Danone with raw materials—emits three times as much greenhouse gas as the company itself.

Furthermore, the change would come at a cost, yet it would be in the interest of growing a more sustainable supply chain for the company. He gave the example of recycling the PET containers of its products, which may not be profitable at this point—“But when oil will cost $150 or $200, it will be too late.”